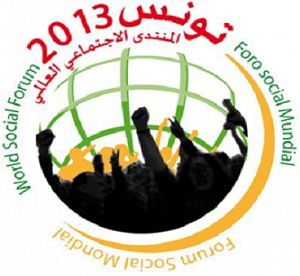 The World Social Forum is just a few weeks away; global mobilisation is happening at a rapid pace, and expectations are growing by the second.

This is the first time that the World Social Forum will be held in an Arab country.

The theme is dignity, and the country is Tunis, the one that started the domino effect of Arab uprisings, but one, which is facing a critical point in its democratic transition. But what kind of impression do Tunisian activists have of this edition of the WSF so far?

The expectation from the World Social Forum (WSF) by the different actors in Tunisia is that it will help the social struggle to grow deeper roots and to radicalize by bringing the different local actors together, and by introducing them to international ones involved in similar struggles. The activists that the Rosa Luxemburg Foundation has spoken to see the forum as an opportunity for networking, exchanging views on alternatives and creating a discussion that has both local and global perspectives and that carries the potential to offer practical alternatives to the challenges Tunisian activists face. Some activists are also interested in creating projects that will outlive the forum and enrich Tunisian civil society.

When the choice of the host country was made – it was between Egypt and Tunisia –Tunisia was chosen for political stability reasons. This of course leaves Egyptian activists with high expectations as the focus on the two countries was due to the start of the uprisings in both and the hope they have given to the rest of the world. With the initial possibility of the WSF taking place in Egypt, Egyptian activists were looking forward for the international solidarity that this event will bring for the Egyptian Revolution and for the new movements that have emerged in the recent years, as well as for their ongoing fight against the same regime that is a subordinate to Western interests and international financial institutions. Egyptian activists see the forum in Tunisia as a chance to exchange views and experiences with their Tunisian counterparts in particular, as there are a lot of parallels to be drawn. They also hope that this will be more than an NGO forum, and a place for social movements to learn from each other. They’re looking for getting a chance to represent the diversity of the Egyptian social movements and get stronger through the experience of others. However they feel that Egypt has been marginalized from the WSF so far, especially during the organisation meeting that took place in the summer in Monastir, and they hope that this will be avoided in the forum in March.

There are, however, numerous concerns with regards to the way the Tunisian Organising Committee (OC) is managing the organisational process of the forum. Some Tunisian activists fear that the forum will be no more but a bourgeois convention at a shallow level without concrete outcomes. They think that some of the organisers have interest in keeping the matters at the usual seminar level, not involving Tunisian social movements deeply in the organisation process and making this – as opposed to the WSF’s founding charter – a very hierarchical process controlled by the well established NGOs. They think that some of the organisers are not in favour of a more radical and inclusive social movement process, as they are mere reformists who are not necessarily thinking in what is in the best interest of the bigger revolutionary picture.

The more optimistic believe that the OC merely has serious organisational deficiencies. Some attribute that to the legacies of oppressive regimes, especially of the ousted president Ben Ali, who for many years has prevented civil society from organising events with big attendance and have left this expertise in the hands of the remnants of the old regime. However, disappointment is widespread from the OC who for many seems like an exclusive club, which is limited to the capital, does not have a clear plan for involving the different governorates or actually lacks the will to involve them. Even the UGTT (Tunisian General Labour Union) that should be deeply involved in organising the Tunisian WSF – they have strong links with workers and the society and have played and continue to play a very important role in the revolution – are somehow left out of the organisational process. To counter this and at their own initiative, they involved themselves in the Youth Committee, a sub-committee of the OC, alongside the UDC (Union of the Unemployed Graduates), and UGET (General Union of Tunisian Students) and formed a steering committee for youth activities. They were also all very involved in mobilization events such as the cycling mobilization caravan that went around the country in October 2012 and aimed for a decentralized mobilization process.

Others believe that some of the problems that are seen with the organisation lie with choosing Tunisia in the first place: a country with an ongoing revolutionary process, an extremely precarious and polarized political situation, and pressing priorities that entail different realities for different stakeholders. These factors might not provide the OC with the luxury of planning with ease an event with the enormity of the WSF. The assassination of Chokri Belaïd, a leftist opposition leader, trade unionist and lawyer and how it resulted in angry nationwide demonstrations where tear gas was fired and cars were set alight and which resulted in a national general strike on Friday 8th of February; is one clear example of that and which leaves the remaining weeks till the forum with an unclear fate and leaves room for speculation.  Furthermore, the OC supposedly has the support of the government, but this does not always translate into the logistical support needed on the ground.

It should be mentioned that there are positive examples of local and international mobilization efforts by the Tunisian civil society organisations with the support of the OC. An international organisation meeting was held from 14-17 December 2012. Also, local forums were organised in Monastir, and in Jendouba from 24–27 January 2013.

In conclusion, different activists are trying to make the best out of the upcoming WSF by thinking of activities they can organise either formally by registering it on the forum’s website or informally by connecting with others locally or even internationally, if they have the links that allow them to do so. Different organisations are trying to think of activities that could take place outside the capital, as the WSF seems to be mostly limited to Tunis and a few other big cities. According to those organisations, the WSF should benefit the average aware and engaged citizen who, normally, is not able to travel abroad, and make the best use of this unique opportunity to have the world of like-minded people brought to them with whom they can share their experiences and learn from similar struggles. It seems very important for everyone we spoke to that the international WSF participants are able to connect to local struggles in Tunisia in order to provide for everyone’s benefit.

Some civil society organisations have thought of organising a parallel forum, as has been the case in previous social forums. However, they have decided not to go through with this for several reasons. Organising a shadow event for the WSF requires an enormous amount of work. Activists thought that this time and effort might be better utilized in making the best out of the existing WSF and organising their own activities on the margins. For example: The experience of “Ahl el Kahf” (network of politically engaged artists) with the preparatory meeting that took place in July 2012 in Monastir/Tunisia proved to be quite successful. At their own initiative they organised artistic performances that took place in the street, collaborated with the international migration initiative “Boats for People” and were one of the few successes of this preparatory meeting; an experience that they want to replicate during the actual forum. Moreover, it does seem somehow illogical to create a shadow forum for the WSF, which was actually created as a shadow forum for the annual World Economic Forum that takes place in Davos/Switzerland.

Tunisian activists generally are in a state of frustration due to the development of the revolutionary process and the deeper push for EU hegemony in the country and the entrenchment of a neoliberal agenda that has severe negative repercussions on the Tunisian society. One of the clear manifestations of that is the EU/Tunisia “privileged partnership” that has been signed on 19 November 2012, a step that was pursued following the Tunisian revolution and which is detrimental to the Tunisian society. The links between social movements and the political party as well as the parliamentary spheres seem to be missing.

In all our discussions, there was no mention of plans to discuss new political paradigms at the WSF, and of steps to get out of this impasse of further EU hegemony in post-revolution Tunisia. However, it does seem that the WSF might be a good platform to think about how to get social movements to affect the decision-making on the political level. But there seems to be a disconnection between the WSF process in general and the change that can be created through affecting the political process. Yes, the WSF is a non-partisan platform and party representation is banned, but obviously a lot of Tunisian progressive politicians are in a way or another involved in the process, so this might be a chance of getting something out of it for the country or for the “Arab Spring” region as a whole.

It seems that the WSF preparatory meeting in Monastir last July has left a bitter taste with all organisations and movements involved. People wonder whether the forum will be a replication of the four chaotic days they spent in Monastir. Moreover, activists insisted that people and civil society organisations that are allowed to participate should be more carefully selected, so that WSF-Tunisia does not send the wrong message. In Monastir, Moroccan groups with government affiliations were present, while important social movement actors were missing. Moreover, some Mashrek countries (the east of the Arab world) were completely absent. Subsequently, activists are worried that this might be the case at the WSF as well, due to problems with international mobilization. In the remaining weeks before the WSF, the OC needs to work really hard in terms of mobilization if it is serious in making this forum an open platform where people can actually discuss how “Another World is Possible”.

Mai Choucri is the project coordinator for the Rosa Luxemburg Foundation in North Africa. She has been involved with different NGOs in Egypt since 2005. She holds a master’s degree in migration and development studies.