Rosa Luxemburg Stiftung at the World Social Forum 2015 in Tunis

For decades the Palestinians and most of the Arab region conceptualized education as a process of production and transformation of knowledge from one eligible side that represent the minority, and consequently receiving and digestion from the other that represents the majority of people. Whether formal or informal, the educational approach has been, more or less, the same as based on preaching information and knowledge in the formula of absolute facts, and demanding absorption by the receivers. No criticism or creativity was fundamentally institutionalized within the process of education and learning, which has led to a status of social backwardness, where people become recipients of packaged knowledge, moreover fragile and easy to handle. This reality has facilitated a fertile soil for the fundamentalist religious and political movements to spread their seeds and over rule.

This situation has only caused the deterioration of the progressive and leftist social and political perspectives, where it became of atomist importance, for those aiming for progress, that they stop and rethink the whole methodology of education and learning processes.

In an attempt to systematically contribute to these efforts, the Rosa Luxemburg Stiftung (RLS)
Regional Office Palestine has developed an emancipatory education program, in which suggestions of alternative educational tools can be presented and fostered, aiming not only at creating progressive approaches towards emancipatory thinking, learning and acting, but most importantly at persuading the new generations to get more engaged in the debates of concern.

As part of that notion, and amongst a number of interesting initiatives, the RLS Palestine has accompanied two creative young educators to the World Social Forum (WSF) in Tunis, in order to suggest and present their modern tools to a wider audience and participants, not only from the Arab region, but from different parts of the world.

The first tool was the Forum Theatre, suggested and organized by Mohammed Eid from Ashtar Theatre in Ramallah, who is a theatre actor and director, along with counterparts from Tunis. The Forum Theatre is based on the concept of engagement and involvement of audience, where prominent issues are presented by actors, and then suggestions of change and proposals of conflict resolution are laid out by the participating audience. Eid and other relevant actors from Tunis have put together, in three days, a Forum Theatre work called “Mariam is not a virgin” that tackles women rights in the Arab countries, and then presented a performance at the WSF in the RLS-tent. Over 70 people have attended the show, and many of them have vitally contributed to the afterwards discussion. Some of the audience stepped at the stage, adopted to key roles of the play and tried to present their perspectives towards the conflict resolution. The discussions, the suggestions, the performances of the different participants were quite important and meaningful; however the entertainment and fun atmosphere was an asset to value. 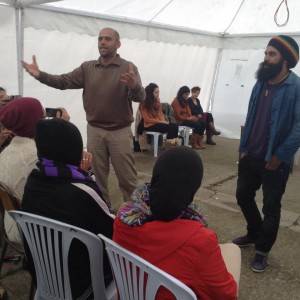 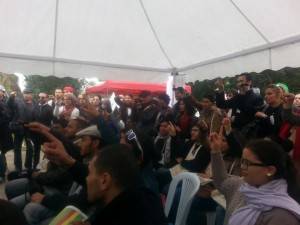 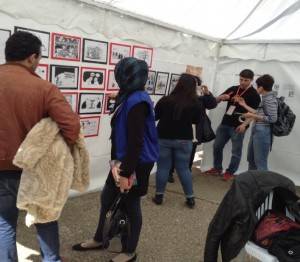 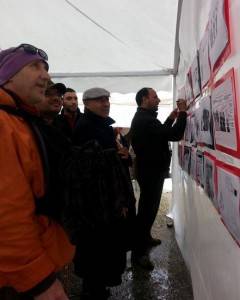 The second tool was the comic and caricatures form of art, suggested and organized by Ruba Totah, from Tamer Institute in Ramallah. Many artists around the world have used the concept of comics to criticize and to suggest ideas for social and political change, and it was almost always influential, especially amongst the youth generations. Totah has developed this concept to be used as a tool for wider engagement of people towards not only involvement in the issues’ discussion but also towards creativity of suggestions. She has arranged a number of known comics from celebrity artists from different countries, and omitted parts of it, whether part of the drawings or part of the words (commentaries), made copies, hanged on the walls of the RLS tent at the WSF, and asked the random visitors to fill in with accordance to their own perspectives. Many people have taken part, and found the idea quite appealing. They adapted to the artist role and became the painters and commenters. Many new ideas and many commentaries have accumulated after 2 days. Participants expressed their pleasure and interest, once asked about the experience. The desire for engagement and for creativity has manifested.

Those two quick little exhibitions of emancipatory tools were very telling. People in general, and youth in particular, are interested of more than the classical set of knowledge transfer where there are traditionally preachers and passive listeners. The none classical tools in which people are engaged and become creators themselves, might be quite effective, as tools for change, if better developed and wider used.

As human technology, transportation, nutrition and clothing develop to meet our modern needs, so are our methods, concepts and tools of education and learning need to break through traditions, taboos, superiority, hierarchy and patriarchy. Communities can never genuinely progress without active participation, creativity and wide open horizons of the people, all the people, never minding their age, sex, ethnicity and class. Most importantly, never minding their capacities, those usually set based on classical discriminatory approaches.